Prof. Andy Manwaring holds a 8th Dan in Ju-Jitsu, and is the Founder and Chief instructor of Red Rose Bushido Ju-Jitsu, a successful martial arts training centre with around 90 members and 10 instructors, based in Morecambe.

Andy started his Ju-Jitsu training in 1984, previously trying other arts but Ju-Jitsu, apart from being the closest club to where he lived, seemed to cover all the areas of combat he expected from a Martial Art. The Bushido Kempo Ju-Jitsu club was based on the outskirts of Carnforth in Lancashire and run by Prof. Paul Jackson 6th Dan. 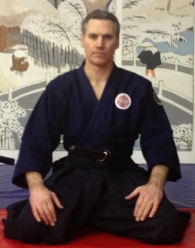 Since then Prof. Manwaring has been fortunate to have been able to train with top instructors from around the World Including from the UK, Brazil, USA, Russia and Japan, with his main Instructor, from 1997-2006, being Prof. William Rankin 10th Dan Ju-Jitsu, to whom he became a personal student and eventually the Inheritor of his system Lan-Kin-Fa Ju-Jitsu.

Prof. Manwaring currently teaches at clubs/courses around the UK and as far away as Russia, USA, Italy, Portugal and Spain. Prof. Manwaring does not just at teach at Ju-Jitsu clubs, having taught Close Quarter Combat and Self Defence for many other clubs/associations including Aikido, Judo, Taekwondo, Karate and Mixed arts (Budo), even Police and security forces.

Prof. Manwaring is recognised as the founder of the Red Rose Ju-Jitsu and the Inheritor of the Lan-Kin-Fa Ju-Jitsu by the WHFSC, one of the leading bodies in registering martial arts styles and their headmasters/founders.

Qualifications and awards include: