Eryk Murlowski was born in 1960. Thanks to his father (Rajmund Murlowski 1922-1978 ex special force member) in 1970 he began training in self defence and Jujutsu.

For the period 1976-1986 he practiced judo. During 1983 and 1984 Eryk served in the Army where he ran self defence classes for officers. In 1984 he obtained instructor qualifications and opened the first Jujutsu class in Opole. As a representative of Polskie Centrum Jujutsu (Polish Centre of Jujutsu) he recieved Shodan Goshin-Jutsu grade in Warsaw.

In 1989 Eryk began his work in the security sector, and in 1990 he opened one of the first security companies in Opole County. In 1991 Eryk become President of the ‘National Workers Detective and Security Assosations’ in Bielsko Biala (Przewodniczącym Krajowego Zrzeszenia Pracowników Agencji Detektywistycznych i Ochrony w Bielsku Białej).

During the early 90’s he practiced with Dr. Josef Linder from Moscow (hand to hand fighting, shooting and tactics), in 1993 he became a representative in Poland of the ‘Josef Linder Federation’ called ICCTA- ILETA as an Instructor C.Q.B. and Regional Coordinator and later he was promoted to an ICCT–ILETA (International Association with main offices in Nuremberg and Moscow) Expert covering schooling, training, consultation, security, safety and anti-terror.

During the period 1989-2009 Eryk has been actively working in Security (office work, convoys, building security for special request) and Bodyguard for various VIP (politics, President of Poland A. Kwasniewski and many other foreign guests and businessmen), he also organizes special training for many government bodies. During his career he has progressed from Office manager to owner, Chairman, and Technical Director. He is an outstanding figure in the Polish martial art’s circle. He has 7th Dan Jujutsu, 6th Dan Yawara and Kyoshi, Shihan titles.

Eryk is founder and chairman of the ‘KOBUDO KENKYUKAI’ Centre (est.1988), he is also a founder (Shodai Soke) of the original martial arts school and self defence style ‘SHINYO SHINDEN RYU YAWARA’ (est. 2008).

Between 1986 and 2012 Eryk has taken part in more than one hundred and eighty seminars, Nationally and Internationally (e.g. Great Britain, France, Russia, Belarus, Austria, Germany, Finland, Sweden, Denmark, Italy and Japan). He has participated in several dozen lectures and Jujutsu demonstrations around the world and has taught self defence, Jujutsu and other combat techniques to various groups (youths, adults, security employees, police forces, military and special groups from other martial arts systems including - Aikido, Karate, Krav-Maga). Under Eryk’s instruction and guidance more than 20 former students have gone on to become Jujitsu instructors. 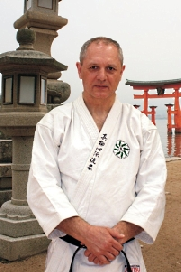